Charles Schulz worked single-handedly, or legend has it, in his newspaper comics series Peanuts for almost half a century. This means that Schulz produced an impressive number of Peanuts dailies and Sundays (18.020, if I'm not mistaken). Such a huge amount of work needed a creative method. This means that Charles Schulz had recurrent narrative formulas: the football gag, Linus and the great pumpkin, Snoopy against the Red Baron, and many others... These formulas, repeated over and over again, are one of the explanations for the series' success: as Umberto Eco noted (The Role of the Reader: 160):


Under the guise of a machine that produces information the criminal novel produces redundancy; pretending to rouse the reader, it in fact reconfirms him in a sort of imaginative laziness and creates escape by narrating, not the Unknown, but the Already Known.

And yet, Umberto Eco also said in "The World of Charlie Brown" (Apocalypse Postponed: 39):


[...] [some] artists, working within the system, performed a critical and liberating function. As usual, it is a matter of individual genius: to be able to develop a language so incisive, clear and effective as to dominate all the conditions within which the language must operate.

I agree with Umberto Eco, but I fail to see why the double standard? Aren't newspaper comics series as formulaic and redundant as crime novels? If, as Eco also wrote (44) "[Charles Schulz showed] us, in the face of Charlie Brown, with two strokes of his pencil, his version of the human condition[,]" how often did he do so in his 50 year run on the strip? How many of his 18.000 plus comic strips and Sunday pages convey new relevant information, go beyond innocuous gags or avoid escapist fantasies like lots of Snoopy strips and pages? Not many I suspect...

Charles Schulz didn't repeat his formulas ipsis verbis and ipsis imagines though: the former functioned as themes to his variations effectively approaching Peanuts to traditional jazz music. What amazes me is how often Schulz borrowed (mostly) visual themes from Percy L. Crosby. 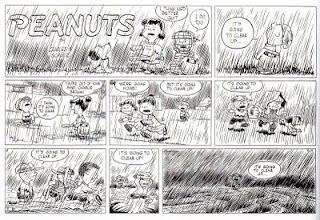 As we can see above Charles Schulz swiped his baseball and rain theme from Percy Crosby, but things are a bit more complicated than that. Let's see what's different first... Percy Crosby did basically a daily that's really a single panel cartoon: it's funny because the answer to Skippy's question is quite obvious. Charles Schulz did a Sunday page in which the plot is different from the above mentioned strip: Charlie Brown tries to retain his players repeating like a mantra, "It's going to clear up." (Skippy and Charlie Brown are quite different characters being the former a lot more feisty than the latter.) Charlie Brown is also more neurotic than Skippy: whenever his team is in question he gets quite anxious, that's why he wants to stay in the field in spite of being raining cats and dogs. What's the same in the two examples above (hence the swipe) is the last panel. Percy Crosby was a great visual thinker: he used the huge empty space around Skippy to convey loneliness. Schulz did the same thing. Percy Crosby did one panel comic strips frequently. What's amazing is that each time he did it the space meant something different. For instance: in the image below the empty space helps to characterize Skippy as someone who's always restless (other times it's just a gag or a beautiful landscape).

The genesis of the rain gag can be found in Life magazine (as seen below). 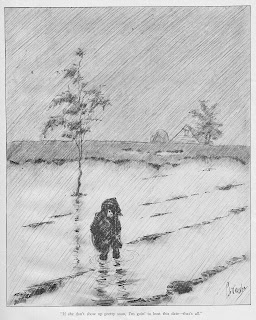 
A few years later Charles Schulz did (sort of) swipe the text, as seen below.


The little red-haired girl is another recurrent theme ripped-off by Charles Schulz from Percy Crosby.


Again, as we can see by their reactions Skippy Skinner and Charlie Brown are very different from one another, but there are two swipes, in the above and in many other strips: one is verbal, the other one is visual. The former is the name of the nameless characters: the girl in the reddish pink dress for Crosby and the little red-haired girl for Schulz. The latter is only visual because we can't see it: the two girls are alluded to but they're never shown.

In the strip below we can see both the losing baseball team (also used and abused by Schulz) and the girl in the reddish pink dress themes. 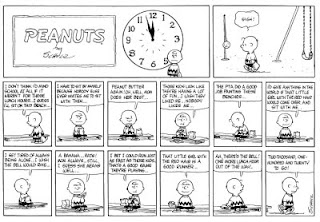 There are a couple more visual solutions that Schulz picked up from Crosby. The most important one is the "kids' talking heads behind the stone wall." It's just that Percy Crosby put his characters talking behind fences. 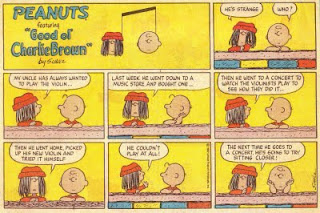 (I miss the Sunday pages' colors in the Fantagraphics reprints!)

Finally here's another baseball swipe (or "inspiration" if you, sacred cow worshippers, prefer). 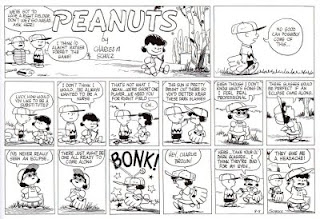 As seen above Skippy is absent minded and jealous while he's in the outfield. He gets beaned by a baseball. Charles Schulz put Lucy in Skippy's place in one of his most confusing and weak Sunday pages. Truth be told she would come to the mound to talk to Charlie Brown a lot more often than she stayed in the outfield being inept.

If this post aroused your curiosity re. Skippy buy this beautiful book. You won't regret it, I can assure you: 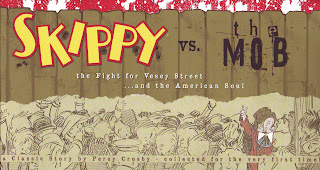 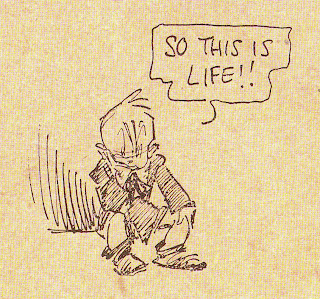 Posted by Isabelinho at 3:14 PM

Those are some beautiful drawings. Just saw another post today re: Percy over at the Panelists. Thanks for bringing him to my attention!

Thanks a lot Sean, and you're welcome!

Jules Feiffer said about Percy Crosby: "Percy Crosby caught lightning in a bottle and learned how to draw with it.”

But thanks for showing the visual and thematic swipes, Domingos. It's fascinating to see where Schulz got some of his tricks..

The simple fact that you found the red-haired girl page tedious is proof enough of how great it is. Think about it... Plus: the last panel is priceless.

Thanks, Domingos. I see what you mean, the correspondences are there and I like Crosby's drawings.

Domingos! How long have you had this blog? This post is awesome.

I did post, for almost a year, at The Hooded Utilitarian though. I did "Monthly Stumblings" there.